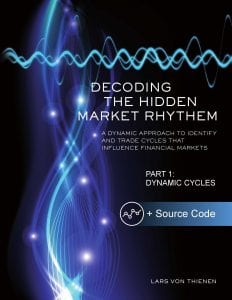 Abstract / Summary:
A dynamic approach to identify and trade cycles that influence financial markets. This book reveals new algorithms to identify cycles that drive financial markets. Learn about how to properly detect tradable cycles in markets, how to use that information to improve technical indicators and how to forecast using cycles. Watch as we step through many trading examples using these tools.

The book provides solid knowledge on a new cycle analysis approach and ways to use it in the trading world. Included is the methodology behind the implemented tools along with concrete examples of how to put cyclic analysis into trading practice. This approach is different from traditional cycle approaches in that this is the first time that a dynamic approach to cycles has been presented.

Abstract / Summary:
The second book of the series introduces correlations between markets and external energy cycles like gravity and geomagnetism. Digital signal processing techniques are used to reverse engineer Gann’s master cycles, resulting in a 100% mechanical cycle-based trading system that has shown a compounded growth rate of 20% per year over the last 30 years when back-tested using the Dow.

Part 2 introduces new non-linear indicators and reviews the significance of a cyclic sentiment predictor for the Dow Jones Industrial Average Index. To that end, using daily data covering the period from 1935 to 2013, ancient cycles are condidered as predictors to forecast daily sentiment for years ahead of time.

The forecast plotted as an indicator is transformed into a mechanical trading rule whose profitability has been evaluated against the Dow buy-and-hold performance of 1990-2013. The results suggest that trading based on recurring sentiment significantly outperforms the Dow in nearly all performance metrics, including net return, profitability, and Sharpe ratio. A genetic algorithm is a promising way to detect and follow the status of dominant cycles. It is a new alternative to using digital signal processing for detecting possible cycles. Akin to chromosomes in a genome, genetic algorithms will check possible cycle length settings for long, short, and exit signals. The genome transforms based on an evolutionary process that involves mutation, crossover, and survival of the fittest. Similarly, based on a random population of cycle genomes, the genetic algorithm will evolve to detect useful cycles at different starting points and optimize these cycles based on the rules of natural evolution. Each genome is measured against a special fitness function that simply checks the equity curve that would result if you had traded these volume cycles. The smoothest upward sloping equity curve will have the highest fitness score and the best rating for the cycles in the evolution process.

This third book of the series explains how to combine cycle analysis with the use of genetic algorithms to develop entry and exit scripts for real-time trading.

Preview Material:
Technical functions to apply the genetic algorithms combined with cycles are already implemented in the WhenToTrade Charting Platform. Current users can already “play” with the algorithm on their own. Please review the following articles prior to book release: