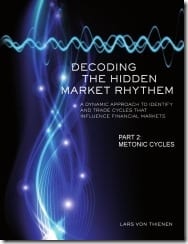 I am proud to inform you about the release of the new Book Part 2 “Metonic Cycles”. A lot of content and examples have been added – so it is a real new book compared to the first initial release in 2010. Endless nights and hours of work have gone into it.

This second book of our series introduces correlations between markets and external energy cycles like gravity and geomagnetism. Digital signal processing techniques are used to reverse engineer Gann’s master cycles, resulting in a 100% mechanical cycle-based trading system that has shown a compounded growth rate of 20% per year over the last 30 years when back-tested using the Dow.

In addition, it introduces new non-linear indicators and reviews the significance of a cyclic sentiment predictor for the Dow Jones Industrial Average Index. To that end, using daily data covering the period from 1935 to 2013, ancient cycles are condidered as predictors to forecast daily sentiment for years ahead of time.

Forecasts, plotted as an non-linear indicators, are transformed into a mechanical trading rule whose profitability has been evaluated against the major markets buy-and-hold performance of 1990-2013. The results suggest that trading based on non-linear indicators (“cyclic time”) significantly outperforms the linear-time based indicator strategies in nearly all performance metrics, including net return, profitability, and Sharpe ratio.

The book is available via CreateSpace / Amazon. Order your book here: 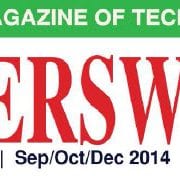 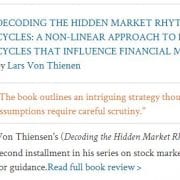 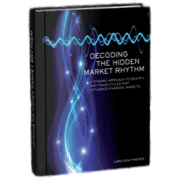 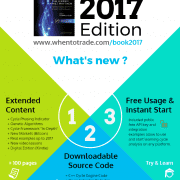 Visit us at TradersWorld Online Expo #15
Scroll to top